I did choose a new name for her, but it’s not too far off from her original name. Her name is now Genie! She’s a great dog, very well behaved and smart – if a little rambunctious at times. She’s got tons of energy so we go on walks twice a day during the week when I have to work. My other 12 year old dog, Tank, has adjusted to having a young dog in the house, which did take a few weeks but they get along pretty well now. The cats are a little iffy on her yet, she always wants to play with them but they don’t want to play with her. No issues with her biting or attacking them thankfully, since there were some concerns about that as she came from the puppy pack that killed a few feral farm cats. I think in a few months they will be just fine together. Overall, she’s settled in great and it feels like she’s been with me and the rest of the gang for much longer than two months! I am very happy with her and I think she is very happy with me too.

Also, I got a DNA test done for her (and Tank too) to find out what breed mix she is exactly. Turns out she’s not a German Shepard Corgi mix! She’s 51.2% Australian Cattle Dog, 25.8% German Shepard, 9.6% American Eskimo Dog, 7% Chow Chow, and 6.4% Norwegian Elkhound. No Corgi whatsoever, so I’m not sure where the original owners got that from. You can definitely tell she’s got a lot of the Australian Cattle Dog in her because she does try to herd Tank and the cats a bit, and she’s just got so much energy and speed too. Super cool to see the results and learn some things about dog breeds. By the way, Tank is 34.3% Pomeranian, 31% Pug, 18.8% Dachshund, 9.8% Pekingese, 6.1% Schipperke. When I adopted him from the Lakeshore Humane Society 11 years ago they said he was a Pug Dachshund mix so that was pretty accurate!

I could go on and on about my dogs (so great to be able to say dogs now instead of just dog!!). Thank you so much for giving me the opportunity to adopt Genie, she is so wonderful. Like I said earlier, I am very very happy to have her home with me!! 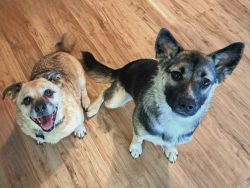 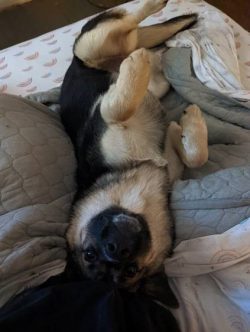 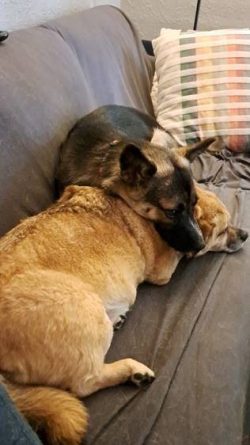